Back To Home
Presidence 20 novembre 2020 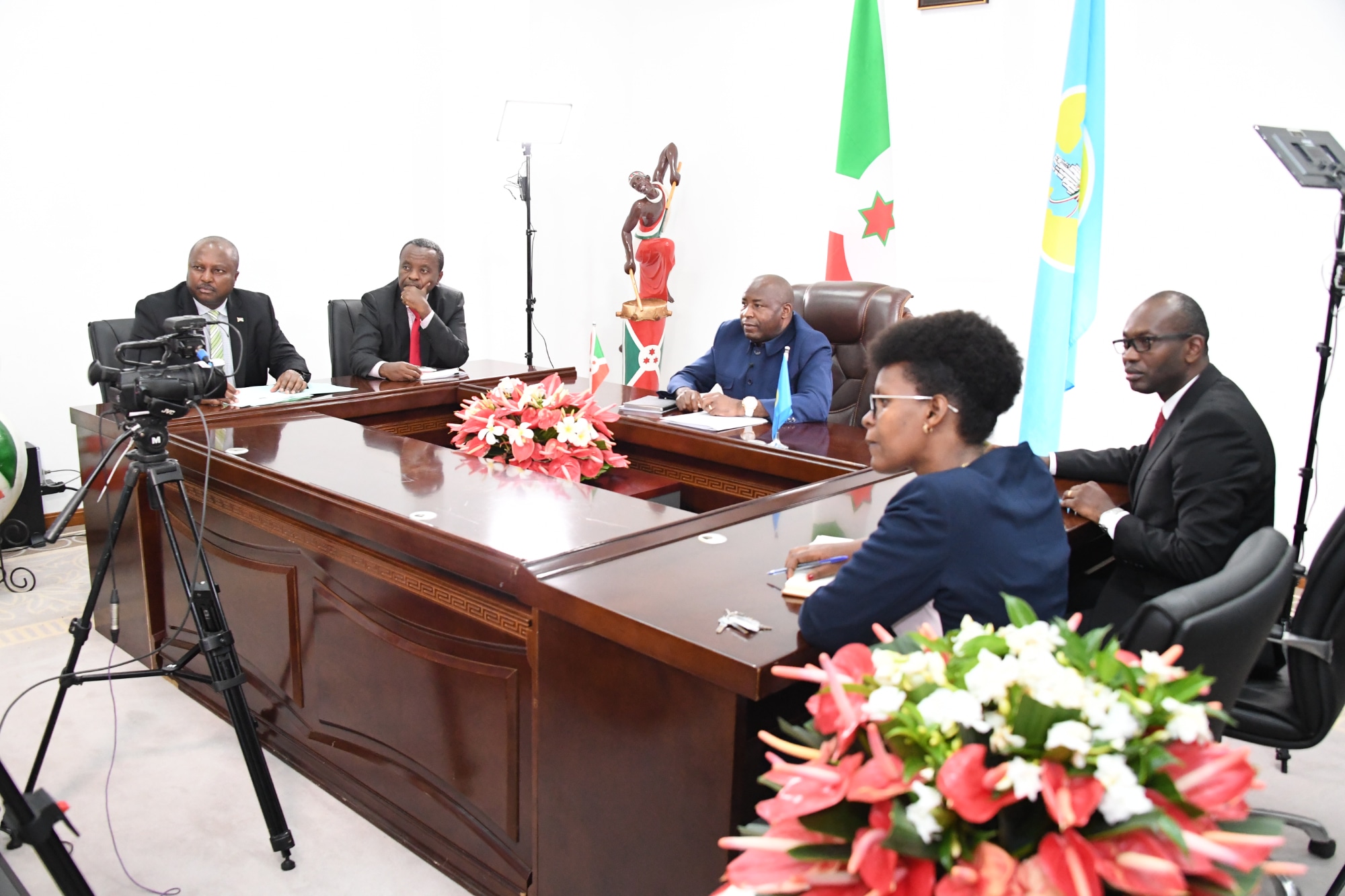 From Bujumbura, the economic capital, the Head of State, His Excellency Evariste Ndayishimiye, took part in the 8th Ordinary Summit of the International Conference on the Great Lakes Region (ICGLR) organized virtually on November 20, 2020 under the theme: “Foster the implementation of the Pact on Security, Stability and Development in the Great Lakes Region by intensifying cooperation and regional economic development. ”

The Congolese Head of State HE Denis Sassou Nguesso, current President of the ICGLR, began the activities of this virtual summit with a silence minute in tribute to the late President Pierre Nkurunziza, former President of the Republic of Burundi whose death unexpectedly occurred in June 2020.

In his speech to launch the 8th Ordinary Summit of the ICGLR, His Excellency Denis Sassou Nguesso hailed the positive political dynamics observed in the Member States, which is the result of the openness efforts made by the States and Governments .

He also positively appreciated the good conduct of the electoral processes in Burundi and in Tanzania and expressed his wishes for success for the next elections in the Central African Republic. He also welcomed the efforts for peace and fraternization initiated with a view to bringing Burundi and Rwanda closer together: “I form the ardent wish to consolidate these initiatives for the good of all peoples. I take this opportunity to appeal to our partners to promote Peace because certain actions serve interests which are often contrary to the aspirations of our peoples ”

Invited to deliver a speech, the United Nations Secretary General Antonio Guterres praised “the resilience of the ICGLR countries in these difficult times caused by the global pandemic.” Regarding security in the sub-region, he called for an immediate ceasefire for all armed groups raging in eastern DRC: “We recognize the progress made but many challenges remain, particularly of a security nature in certain areas. These armed groups profit from the illicit exploitation of natural resources. We urge all actors to prioritize non-military measures in conflict resolution. ”

Surrounded by senior officials of the country including the Burundian Minister of Foreign Affairs and International Cooperation, the President of the Republic His Excellency Evariste Ndayishimiye spoke in that first summit in which he participates as President of the Republic. He first of all congratulated His Excellency Denis Sassou Nguesso for « his diplomatic elegance, his leadership and his professionalism in the pursuit of the implementation of the Pact on Security, Stability and Development in the Great Lakes Region. »

In this regard, the Head of State urged all Member States of the ICGLR to respect the Agreements and Protocols of which they freely signed and not to use complacency or complicity: “To preserve the gains of Peace and Stability which are observed in general in our Region, and this despite the presence of some residual negative forces in the eastern part of the DRC, We call for respect for the Pact on security, stability and development in the Great Lakes Region, in particular Article 5 of the protocol on non-aggression and mutual defense in the Great Lakes region. ”

To this end, President Ndayishimiye hailed the decision of the MCVE to hand over to the Government of Burundi the criminals who, coming from Rwanda, and retreated to this country after having attacked innocent families.

In concluding his speech, Burundi Head of State endorsed the unwavering attachment of his Congolese counterpart and current President of the ICGLR to the virtues of dialogue and consultation in the search for solutions to the challenges which threaten peace and Security in the Region.

The 8th Ordinary Summit of the ICGLR closed in a fraternal atmosphere and made the Angolan Head of State “President of the ICGLR” for a two-year term.