H.E Evariste Ndayishimiye: The thanksgiving prayer for the end of 2020 was an opportunity to show the unity of those who believe in God

Back To Home
Presidence 31 décembre 2020

H.E Evariste Ndayishimiye: The thanksgiving prayer for the end of 2020 was an opportunity to show the unity of those who believe in God 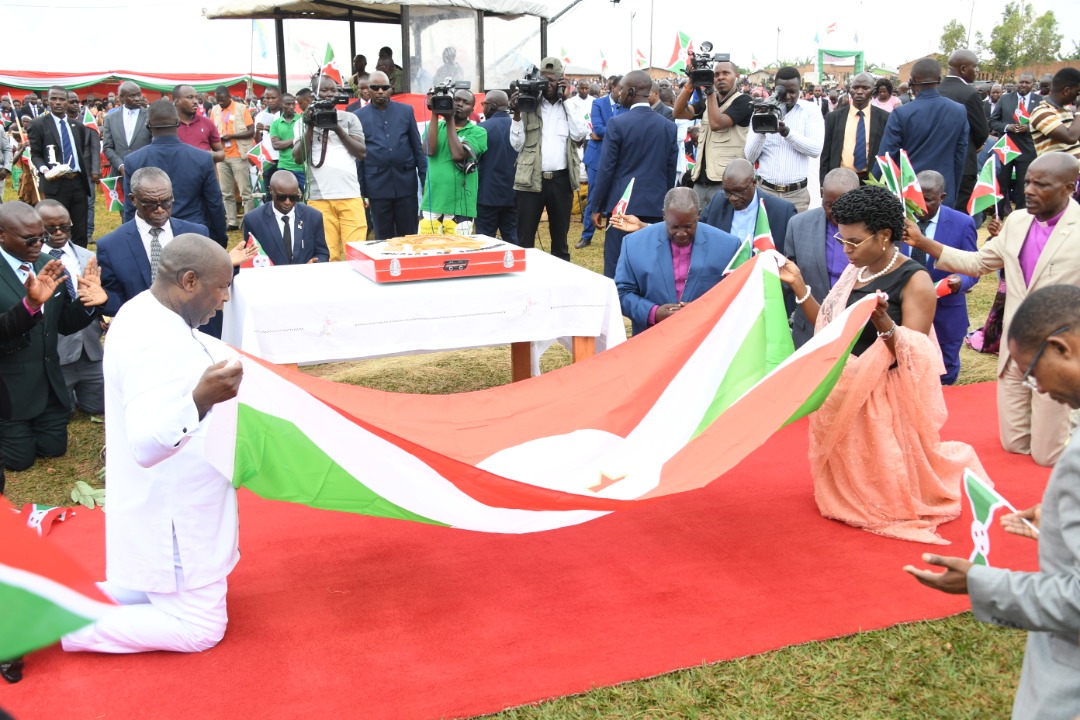 The thanksgiving prayer organized by the President of the Republic, on behalf of all Burundians, which began on December 28, 2020, ended on December 31, 2020. The closing ceremonies took place at the HARATAHWA stadium in Mutaho, in Mutaho commune, Gitega province.

In his closing remarks, the Head of State indicated that the prayer was an opportunity to witness and strengthen the unity and brotherhood among Burundians.
His Excellency Evariste Ndayishimiye recalled that during this prayer, the Burundians submitted before God, the current 7-year mandate and the projects and programs that will be executed during this mandate, so that the Almighty continue to show his will and to show himself alongside the Burundians and Burundi.

The President of the Republic particularly thanked the Almighty for having consolidated the unity and love among the Burundians, which is an undeniable sign that God has been given a good place in all the Burundian families in particular and the whole country in general. He then invited Burundians to further consolidate this love and this unity so that the whole world takes Burundi as a model, in terms of good cohabitation and social cohesion.

Basing himself on the gospel read in Ephesians 4: 1-3 where Saint Paul teaches us to live better together in the love of God, the Head of State urged the Burundians to manifest this love and their unity throughout their life on this earth.
The President of the Republic thanked the leaders of the country for having companied him during the 4 days of that thanksgiving prayer.

He also thanked the people of Mutaho Commune and Gitega province in general, for the warm and fraternal welcome extended to him. He finally thanked the members of the organizing committee for having organized, in an exceptional way, that prayer, the defense and security forces for having well secured those who had been presents to that prayer, as well as the population of the provinces bordering Gitega , namely Karusi, Ngozi and Kayanza, for taking part in that prayer.